skip to main | skip to sidebar


WATCH
CLOSELY
Posted by Dirlicindo at 3:32 AM 8 comments: 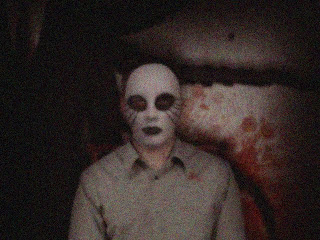 I don't know where ben went, I'm using his account to post this, if anyone is reading it, please send help! Ben is gone, I heard voices outside and I head him scream and then I ran to the spare room and he was gone, there was a circle was an x through it scratched into the wall I dont know what to do the window was broken

We tried to call the police today to tell them what had happened. We called their non-emergency number around 4 times... what we found was... unsettling. The first time we called there was just that beeping sound you get when a phone is engaged - strange, but not call for concern. Same thing happened on the second call. On the third call however, we got static... static, over a phone to a police station. Thinking it was just a problem with the phone itself, we tried my friends mobile first up and got static again, but it was different this time; like the distortion of a corrupt video.

The fifth time we tried the emergency number, we got that distorted static again... but I honestly heard something laughing at me through the white noise...

We decided to drive to the nearest police station....

It isn't there anymore...

Something is wrong.
Posted by Dirlicindo at 5:27 PM 1 comment:

I've managed to calm down a bit, whatever was chasing me must have either given up or gotten lost. It kept saying my name, over and over, it's voice was an unnaturally low pitch, as if someone got regular speech and slowed it down.

I'm staying with a friend for the moment (she will remain unnamed for now). I don't dare go back to my house.

I didn't manage to get a photo, I was so terrified, but I can describe what heppened to anyone who actually reads this:

I was in bed, trying to get to sleep - the doctor gave me some special pills that, amazingly enough, don't work. When I heard this sort of rattle outside, followed by next doors dog barking. I disregarded this at first, dismissing it as a cat or something. But then there were taps on my window. a long series of them, I froze in my bed, the tapping stopped, followed by a thump, as if something was hitting the window!

I got out, shut the door to my room and ran to the kitchen. I grabbed a knife and my camera and turned on as many lights as I could. The window in my room broke, something opened the door and then all the lights flickered and short circited. I was blinded, but I knew the way around my house, I ran to the front door, opened it, shut it and ran as if my life depended on it (it probably did)

I don't know how long I was running for, it kept chasing me, I never saw it, but I could always hear it. I managed to stop at a net cafe' on the way to my friends house (by that time it was 5:00am, I hadn't stopped running all night) and posted my last message. But I dared not stop for too long, in case it caught up.

Eventually, I reached my friends house and explained the situation to her. She was a bit hesitant at first to let some bedraggled, knife and camera weilding man into her house, but she knew me and she's very good at telling when people are lying or not.

In any case, I'm staying here for a while, will be talking to the police tommorow. Still can't sleep and I've been feeling really strange, but I think it will all turn out ok...
Posted by Dirlicindo at 10:29 AM 2 comments: